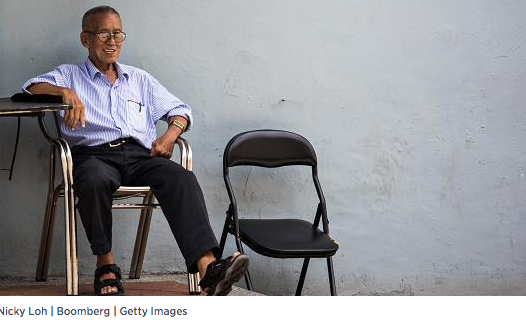 As Asia ages, entrepreneurs rush in

Singaporean entrepreneur Serene Tan first noticed a gaping hole in Asia's senior care market when she was a college student. The developer of GlydeSafe - an intuitive walking aid for the elderly - observed that firms who provided goods and services for the elderly were lacking a personalized, customer-based approach.

"The silver market is underserved because the local landscape of health care and retail is dominated by a few large players who operate a traditional business model of importing from overseas. This inhibits creativity," Tan, director of Sorgen, which develops GlydeSafe, told CNBC. "If we want to improve the standard of living, we have to identify problems instead of using rehashed solutions."

With funding of $150,000 from private and public enterprise agencies, Tan's elderly-friendly mobility devices were launched across Singapore in 2013 after being tested out in hospitals. The business has sold around 150 devices in the past year and is currently working on plans to expand elsewhere in the region.

As governments across the region grapple with a rapidly aging population, inspired entrepreneurs like Tan are rushing to tap an expanding market.

The number of Asians over the age of 60 is expected to hit 1.2 billion by 2050, compared to 450 million in 2012, according to the Pew Research Center. Out of 55 countries, Singapore, China, Hong Kong, and Korea are expected to experience the largest declines in working-age population over the next decade, a Moody's report noted last year. A working-age population typically declines when the rate of people leaving the work force, generally the elderly, is faster than the number of people entering employment.

"Many firms believe that the under-fifty market is bigger than that (of) over-fifty. In fact not only is the market bigger for those over-fifty for almost all goods and services, but this is particularly true in health care and luxury purchases," noted William Haseline, president of global think tank ACCESS Health.

Singapore is perhaps the best example of rising entrepreneurial interest in the silver market, with elderly care a key element of Prime Minister Lee Hsien Loong's plan to make the country the world's first 'Smart Nation' by 2022. The city-state's low birth rates mean the number of senior citizens will triple to 900,000 by 2030, with only 2.1 working-age individuals for each citizen aged 65 and above compared to 6.3 presently, according to government statistics.

August will see the launch of an accelerator program called 'Modern Aging' by NUS Enterprise and ACCESS Health International that aims to help entrepreneurs create new products and services for the elderly.

"New products and services will become test-bedded in Singapore before being brought to the world. In this manner, Modern Aging can help to grow new local businesses, meet the needs of the elderly and make a global impact," said Lily Chan, CEO of NUS Enterprise.
For Yorelle Kalika, the CEO of Global Active Caregivers and a mentor in Modern Aging, demand for elderly care across Asia was just too high to ignore. Kalika's company concentrates on provides affordable care giving services to clients in China, Singapore and Hong Kong.

Kalika decided to launch her own business after a decade-long stint as a management consultant: "When I thought about which sector to invest in, key considerations were that I wanted to do something both sustainable, anchored in a fundamental trend such population ageing."

The company plans to concentrate on its three markets for now, with plans underway to deploy several thousand caregivers in each country.

"Where we operate, the share of the elderly in the total population is growing at a rate of 4 to 6 percent per year, while the overall population is stable. So we are addressing a large, fast-growing market that is extremely demanding."

She notes that her business model of providing in-home care is ideal for Asian clients.

"Unlike in Europe and in the U.S., family values are at the core of Asian culture...You could say we are addressing the same market as the nursing homes, but our value proposition of ageing at home is much more culturally acceptable in Asia."

Indeed, ACCESS Health believes the most pressing opportunities in the silver market are for high quality care services. "There is a need to integrate home and community care with secondary and tertiary care," said Hasletine.